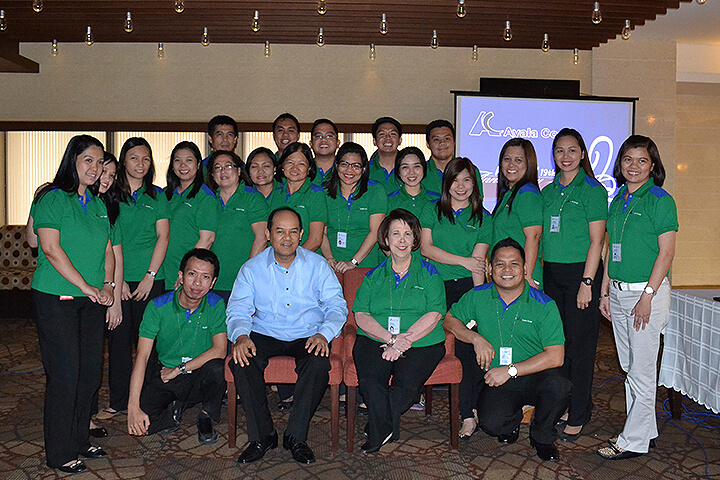 The Ayala Multi-Purpose Cooperative, Inc., spurred by a banner year that saw it increase its membership further as well as raise its overall value, celebrated its 19th anniversary last October 16, highlighting it with the launch of new product offerings and a number of corporate social responsibility activities.

The coop launched two new loan products – the housing and car loans programs – underscoring its ability to keep up with the increasing needs of its members, now numbering 27,000, as it also underlined its ability to sustain those needs with a net value now reaching P1.32 billion.

Under the terms of the two loan programs, members may now borrow up to P400,000, with up to four years for them to pay the loan at an interest rate of 18 percent of diminishing balance (see link), or just .82 percent per month on top of the usual patronage refund. Those availing themselves of the car loan, meanwhile, may borrow up to three times the amount of their share capital.

Coop GM Dina Orosa, meanwhile, spearheaded four CSR activities that she said was the Coop’s way of “giving back” to the community as a form of thanksgiving for the Coop’s continued success.

These are the Manila Bay Cleanup Drive in coordination with the Cooperative Development Authority last October 11, the distribution of school kits to some 1,000 native grade school pupils in a tieup with Clark Water Company last October 17, the Adopt a School Program undertaken in Iba, Zambales last October 17, and a field trip for the Coop’s L.E.T.S. Read scholars in another tieup, this time with the J. Rizal and F. Benitez Elementary Schools as well as the Corazon Atayde Memorial Foundation, last October 22.

Also highlighting the Coop’s anniversary celebration was the service awards given to Coop employees and the 2014 Koopbida Awards Night spearheaded by the Makati Coop Development Office, where the Ayala Coop garnered a number of awards.

Meanwhile, the Ayala Coop bagged three major awards at the Koopbida Awards Night last October 20, including the top award as the coop with the highest net worth.

The Coop took top honors among coops in the city with a net worth of P1.32 billion, and also garnered awards as one of the top five in terms of membership expansion as well as an award for being an active coop in social activities.

The anniversary celebration was ushered in last October 16 with a Thanksgiving Mass at the BPI Chapel, which was followed by a program at 1851 at the 20th Floor of the bank’s main office, where the launching of the new product offerings and the service awards were held.

‘One more chance’ from Ayala Coop